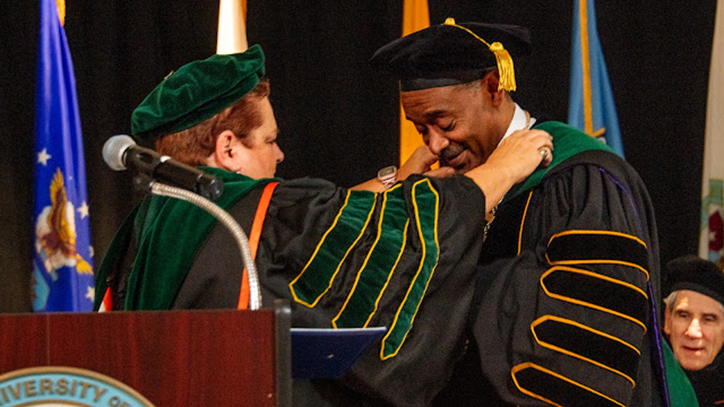 Dr. Nancy Dickey, chair of USU's Board of Regents, bestows the presidential medallion upon Dr. Jonathan Woodson during the investiture ceremony. Photo by Tom Balfour. 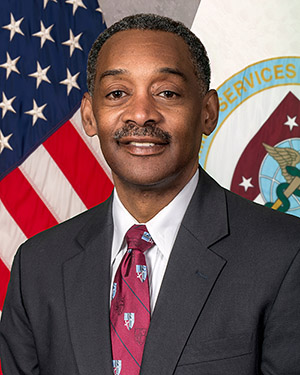 Dr. Jonathan Woodson is the seventh President of the Uniformed Services University of the Health Sciences (USU). As such, he is responsible for the academic, research and leadership mission of the university, which includes a combined total of more than 2,500 students in the F. Edward Hébert School of Medicine and its associated graduate programs in the biomedical sciences and public health, the Daniel K. Inouye Graduate School of Nursing, the university’s Postgraduate Dental College, and the College of Allied Health Sciences. Through its graduate and undergraduate programs, the University has more than 11,500 alumni, many of whom serve the nation as uniformed health providers or civilian scientists. Dr. Woodson also oversees more than 15 research centers and the Armed Forces Radiobiology Research Institute (AFRRI).

From 2010–2016, Dr. Woodson was Assistant Secretary of Defense for Health Affairs and Director of the Tricare Management Activity in the United States Department of Defense (DoD). He was the principal advisor to the Secretary of Defense for all health and force health protection-related issues and ensured the effective execution of the DoD medical mission. He exercised authority, direction and control over the Defense Health Agency, USU, AFRRI, Defense Center of Excellence for Psychological Health and Traumatic Brain Injury, and the Tricare Health Plan serving 9.5 million beneficiaries.

Before his appointment to the DoD by President Obama in 2010, Dr. Woodson was a professor of Surgery and Associate Dean for Students, Diversity, and Multicultural Affairs and senior attending vascular surgeon at Boston Medical Center. In 2016, he was appointed as a member of the USU Board of Regents and later served as its chair.

Dr. Woodson retired at the rank of Major General, United States Army Reserve, and as Commander of the United States Army Reserve Medical Command, Pinellas Park, Florida in June 2022 after 36 years of service. His military deployments include Saudi Arabia for Operation Desert Storm, Kosovo, and Operation Enduring Freedom and Operation Iraqi Freedom. He is a former senior medical officer with the National Disaster Management System, through which he responded to the September 11, 2001, attack on the World Trade Center.

Dr. Woodson is a graduate of the City College of New York and the New York University School of Medicine. He received his postgraduate medical education at Massachusetts General Hospital, Harvard Medical School, and completed residency training in internal medicine, as well as general and vascular surgery. He is board-certified in internal medicine, general surgery, vascular surgery, and critical care surgery. He also holds a master’s degree in strategic studies (concentration in strategic leadership) from the United States Army War College. In 1992, he was awarded a research fellowship at the Association of American Medical Colleges Health Services Research Institute.